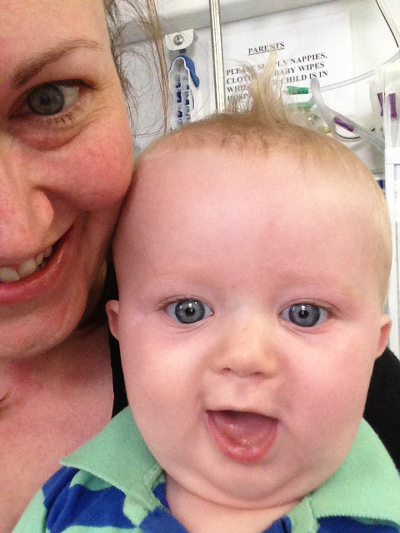 I am trying to translate all my notes and recollections from last week into readable blog posts for you all as quickly as possible.

Everyone likes to hope for the best, but a recent experience, which I don’t feel I can share publically here, made Emma and I vow to each other to not count our chickens before they hatch, no matter what result we get from a test, we’ll wait to see the final report.

It is late on the ward. I’m taking the night watch, and Emma should be asleep at home and recovering from doing three nights back to back. She isn’t. I know this as my phone is buzzing with images and SMSs - I even got an SMS which said “I’m off to bed”. Two minutes later it’s followed by a photo of Mattie Emma taken earlier in the day. We’re both tentatively relieved by the news we received today.

I spoke to our crèche today. Mattie was due to start with the crèche at the end of September as Emma is due to return to work. This unfortunately overlaps with his steroid treatment, and assuming the best case outcome (he’ll be home and better with no spasms) he’ll be starting a little later. I needed to check if our crèche will take a baby with epilepsy, I know that not all do. Even if he’s better, there is a chance that he’ll have another spasm, and they’d need to be prepared for that.

Our crèche is also changing hands. It’s the same crèche Mattie’s brother Ben goes to, so we’ve known it now for over a year. The owner is retiring and she’s selling on the crèche. I spoke to one of the assistants at the crèche who said there was no problem with a delay in starting, but she didn’t know about taking on babies with epilepsy. We’d have to wait and speak to the new owner.

In other news, which I’ve not mentioned yet - Emma got called up for jury duty in October, the letter arrived on Monday. Epic timing. Maybe, unlike when we were burgled, we could claim for that on the home insurance?

The phone rings, it’s Emma; Mattie is out of the MRI. Everything went well. Mattie was sedated for the imaging. He moved once or twice, but they got everything they needed. Now comes the big long wait to see the doctor in charge of Mattie’s case and getting the results. – I’ve nothing to report yet.

I spoke to my boss at work, who has been great. I cancelled my work trip to the UK next week. I don’t think, even if everything goes really well, that I would be giving anyone 100%.

I arrive on to the ward, just in time to see the doctor who is in charge of Mattie’s case leave. Emma quickly updates me on what was said. The MRI showed nothing which would be causing the Infantile Spasms he is experiencing. It may show something else. But we won’t know until the final results are provided. These are due at some point tomorrow I think. The good news is that we’re on track to head home tomorrow. Something we’re all looking forward to.

Mattie will be returning to the hospital every Monday for the foreseeable future for a check-up. Initially this is to gauge the impact of the steroids. It can affect blood sugar and if there is type 2 diabetes in the family (there is) it increases the risk, blood pressure and of course his immune system. The original plan had been to have the public health nurse from Balbriggan check on us at home, but they don’t have the equipment to take a babies blood pressure. So instead we’ll need to report back to the neurology department here in Temple Street. Emma was thankful for this as it also means that each week we’ll have the opportunity to check in on any developments we see with Matthew, and ask questions of the neurology team which the public health nurse wouldn’t be able to help us with.

The doctor explained that the steroid dosage he is on at the moment is very high, so high that some pharmacies would question it, even going so far as to ask about mal-practice. But this very high dosage is based on research which indicates that it helps. It also explains why the dosage is just for two weeks and then tails off with a four week ramp down. There is no guarantee it will help. The doctor explained that the process of finding the right drug combination for Matthew could take months or even years to get right. In the mean time we can only hope that he doesn’t regress.

The good news is that Mattie has a lot going for him. He is healthy, he’s developed normally up to this point. These are good portents. We’ve got more work to go, but our starting place is much better than many others.

After talking to Emma, I felt that it was obvious that the doctor had not given Mattie’s MRI a clean bill of health yet. Emma recalled that the doctor had said that (I’m obviously paraphrasing a second hand quote) … other neurologist may see that certain areas of the brain that might not be as they should be, but when I looked at it there was nothing on it which would be causing the severe spasms he is experiencing. . .

The ward is quiet, but a new baby on the ward has just woken and got scared. Her parents had just left for a bite to eat and she was alone. The nurses have called back the parents and are doing their best to settle the little one. Mattie stirs, but appears to be remaining asleep - which is good. Obviously my typing beside him isn’t waking him up. The nurse comes over and attaches the blood oxygen monitor to his toe. This too fails to wake him.

Mattie has been in good form when awake. Emma told me she got smiles and giggles from him which was fantastic. In fact the images which have just arrived on my phone show a fantastic smile from both of them:

The clusters of spasms are still happening

Right now however it is good to see him sleep so well. He woke 45 minutes ago and had another cluster of spasms, which lasted about 8 minutes, but wasn’t has violent as they have been. Compared to the beginning of the week they seem to be changing. He’s having just one isolated spasm at times, and what feel like longer gaps until a full on cluster of spasms strikes. The steroids should have kicked in by now. The doctor explained that they will look at him again in two weeks. They are treating the EEG not the spasms. The changing nature of the spasms could indicate a change in the EEG pattern, but we will not know until Mattie’s next EEG - and that’s going to happen a week on Tuesday (September 10th). In the meantime all we can do is hope. Fingers crossed that over the next week the seizures wrap up - I sense that we really should be seeing something like that by now. But I don’t know. . . I’m no expert. . .

This is most definitely a marathon, not a sprint no matter how affective the drugs have been.

What we have seen today are smiles, and more smiles from Mattie in one day than we’ve seen in a long long time. That too could just be a side effect of the steroids, but it is very pleasant to see.

Sharing our learning and experiences

Both Emma and I, and you guys reading these missives have learnt so much over the last couple of days; new phrases and terminology, new friends, and other parents. We’ve had the reality checks - even if we got (or get) the most negative news, that we have ultimately been extremely lucky. We’ve come so far from the confusion and shock of Monday. I’d like in my way to do something to help other parents who will find themselves in this position too. Catching the spasms early is so very important, and they are so easy to confusion with other ailments. Perhaps we could share some of the videos of Mattie’s Spasms and the (edited) contents of our notes on line? - Anything really that others can stumble across and that will help them.

Tomorrow morning Matthew has an appointment with an optometrist. According to my own research the condition has is also linked to limited vision, or Cortical Visual Impairment. Basically there is nothing wrong with the eyes physically, an issue with the brain is impairing the comprehension and affectively the meaning of the images the eye is capturing. - This sounds like what my father; a stroke survivor is currently suffering from.

Googling “Infantile Spasms and Optometry” (I know I shouldn’t, but I avoided the crap and stayed with the academic papers on it) suggests that CVI is very common among children with Mattie’s condition, and rather depressingly the prognosis for those children’s vision is also not as good as other children. If he has CVI - then it may improve, but he’ll never have the full vision most of us enjoy. Fingers crossed…

After the optometrist appointment, assuming the official MRI results don’t show anything, and the vision tests go well, then tomorrow Mattie will be able to return home to us. Now that’s a Friday I’m really looking forward to - I just wish I could remove all the “if”s from the last sentence.

The ward is quiet now. The only sounds are my typing, the occasional footsteps from the nurses as they do their rounds, and of course the deep breathing coming out of Mattie as he sleeps.