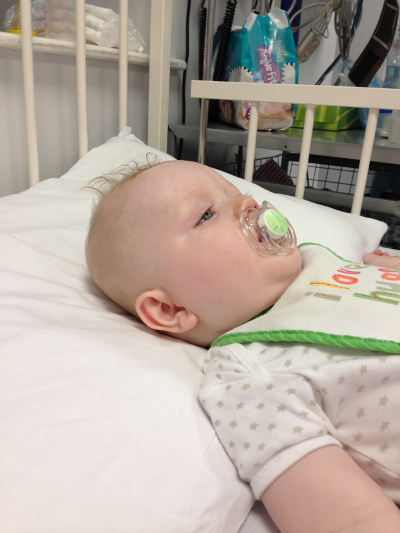 Emma is once again with Mattie. We got news today that his MRI is scheduled for tomorrow morning. As a young baby this will mean sedating him, to do this he needs an empty tummy.

Apparently the low quantity of the sedative they use has one of two affects, it will either put him to sleep, or it will have the opposite affect and make him go hyper and a little wacky. To give the sedative its best shot at working Mattie should be tired too. So the plan for the morning is to wake Mattie at around 3:40am, so he can have a bottle before the four hour cut off before sedatives. He will then have to be up for the day 5:30 / 6am. His MRI is around 8, but the first, preliminary and verbal results won’t be available until tomorrow afternoon. The final results should come through after that.

Mattie was in a much better mood today, we got smiles and giggles from him, and at least the nurses were not taking blood samples from him today, they did that yesterday.

I had agreed with Emma that I would do a night time hospital stay with Matthew, but when we got the news that the MRI would be first thing tomorrow morning Emma, in her own words “played the Mummy card” and decided to stay. I honestly can’t blame her.

Mattie has “Infantile Spasms”. It is labelled a catastrophic neurological condition. In the majority of cases it causes mental impairment. Most children will not develop at the expected rate, and will go on to have issues in later life. Catching it early, treating it before any regression in development makes a huge difference to the eventual outlook. What Mattie has going for him is that:

The Neurology team at Temple Street is bigger than we’d realised. Along with the doctors we’ve met so far this week there are also social workers and nurses. Today we were introduced to both.

We met with one of the social workers; it is their job to help us to adjust to the new reality of Mattie’s condition. As Mattie has a long term condition he qualifies for some additional state funding for his treatment, we’ve bunch of paperwork to complete for this. The social worker also took some time out to ask us how we were feeling, and coping with it all. I appreciated this; it was nice to be honest and frank with someone, and just explain what Emma and I were feeling at the time.

Emma and I both realise we ask questions about Mattie’s prognosis or outlook that it’s impossible for the doctors to predict at this stage. But knowing the condition and the data about it would really help us - as non-medical people - in understanding what we are all up against.

Emma said “We’re both engineers, we like the facts that the figures, we can deal with the uncertainty, just tell us”. The phrase “I’m an engineer” seemed to strike a bit of fear with the social worker replied with “Oh god. OHhh..kay”. Emma went on to explain that she works on and builds medical equipment, and while not neurology equipment, getting up to speed with the condition Mattie has certainly isn’t in a challenge - just tell us. I’m not sure if it was an approach they see that often. The social worker explained that each doctor has their own style and that some of them can be rather brutally honest. I think the honest truth is that Emma and I actually found that refreshing, and comforting in a weird way.

Finally the social worker recommended that we avoid Google for information as it wasn’t always reliable, and tended to be rather pessimistic. – I think, especially for Emma that this advice had arrived a little too late.

Directly after chatting to the social worker we walked from the ward up to the neurology department to talk to one of the nurses. This being the maze of old buildings which is Temple Street we needed a guide to get us there. Even the signage inside the hospital reminds you of the older Irish road signs; ‘Neurology is that way’ points a sign. Following its direction you reach a junction, with no more signs for Neurology. It’s more a general guidance than anything you can actually navigate by.

One of the nurses met us at Neurology and we sat in a private, side room for a chat. Mattie was with us and on the way up to Neurology he started having a spasm. It was a bad one. When they hit, he can cry out. Emma and I have taken to holding him to comfort him and his whole body rocks with the spasms. He’ll hold your hand and either through spasm or reflex he grips you so very hard when they come. Afterwards, when they are really bad he’ll cry. Yesterday I tried to put him down on his cot when one hit. Immediately after one hit him he looked at me with such fear and panic in his eyes, that the only thing I could do is pick him up and hold him, try to sooth him through it. This was exactly what Emma was doing as we sat today talking to the Neurology Nurse.

Emboldened by our conversation with social worker, Emma’s opening gambit was an explanation of our backgrounds. The “I’m an engineer” line had roughly the same effect on the nurse as it did on the social worker. “Ohhh God.”. We started out by asking form background information on Mattie’s condition; can you give us some recommended reading?

The nurses’ first response was - Whatever you do, don’t Google it. (whoops too late).

My recollected and paraphrased conversation with the nurse follows:

Us: So do you have any recommended reading we could do? - Is there a book?

Nurse: No. There is no book. The research is still evolving.

Us: Do you have anything we could read? - If we were going to start out researching this condition where would I start?

The Understanding Infantile Spasms link is one Emma had already found, I’ve subsequently read it too. It’s pretty good, and doesn’t take long to fly through. - I’d recommend it if you were interested.

What the EEG showed

The nurse mentioned that the EEG gives them so much information, so I asked what did it actually show?

Mattie has Infantile Spasms. The old name for this is West Syndrome. It is diagnosed by an EEG. Not just the physical presence of the spasms. If the EEG shows a “hypsarrhythmia” - then that is Infantile Spasms. Mattie’s EEG on Monday showed a modified hypsarrhythmia pattern. I asked in what way was it modified, was it more aggressive, or less? - She didn’t know. Just that it was modified.

Prolonged presence of hypsarrhythmia will cause developmental delays and cognitive development issues. The purpose of the MRI is to ensure that there is no underlying physical issue for Matthew’s hypsarrhythmia. In 30% of cases no underlying cause is identified, this is known as a cryptogenic case. From the EEG the neurological team seem hopeful that the MRI will not show anything, hence boosting the chances of a successful outcome for Matthew.

Side effects of the drugs: Steroids and Immunosuppressants

Mattie is on a very large dose of Steroids. They do have some side effects. He’s going to each a bucket load more, he’ll put on weight, his tummy will be upset and he’ll be grumpy. More importantly it can affect blood pressure and if there is diabetes in the family (which there is, from my side ) then it can trigger issues there too. A more immediate concern is the impact to Mattie’s immune system – in short it will take an absolute hammering. We’ve to avoid anyone with a cough / cold / dodgy tummy / chicken-pox etc. Basically anything we would have let Ben just deal with, we can’t with Mattie. If he develops anything like that we need to take him to the GP straight away or take him to A&E in Temple Street.

The 6 weeks run straight over and into Emma’s return from maternity leave, which we may need to extend. It also raised a question for us; will our crèche actually accept a baby with this form of epilepsy?

Mattie will be on the steroids for 6 weeks, 2 weeks of aggressive dosage then 4 weeks to wean him of them. His entire system will be hooked on them and basically stopping the steroids directly will affect his whole metabolism. It wouldn’t be a good thing at all.

Assuming that the steroids don’t work - there is an internationally agreed list of drugs which are then attempted, one at a time and at varying levels of intensity. With all possible level of intensity attempted before moving to a new drug. - This can be a long process.

Treatment - assuming no root cause

The key to treating infantile spasms is to treat the EEG. If the EEG returns to normal then spasms should also go and he’ll return to normal. In the mean time we’ll be doing a bucket load of EEGs.

If on the very rare chance that the Steroids do work first time, and if the MRI comes back clear and if his blood tests come back OK, then once the six week course of drugs has completed Mattie could go on almost normally with no additional treatment required. He will have continual monitoring however as a precaution. - But there are a lot of “if”s in that statement.

With all of the above comes such a huge sense of disbelieve. It’s hard to believe that Mattie could be so ill - he just looks physically so well. But he’s in Temple street for a reason, and while the potent ‘so far so good’ stands, and with the neurology team and everyone writing and reading this rooting for him, the published odds are not so good. It’s hard to imagine, and even harder to articulate, but if you were putting money on him to come out all clear, you’d probably lose it.

Tomorrow is going to be a long, hard tough day. The signs so far are good. But I know Emma and I are trying hard not to count our chickens yet. We’ll be waiting for the final MRI results first.

We’re not experts in Infantile Spasms, we’re learning. If you work in this field, or have been through this before and believe that some of the information in any of these stories is not completely accurate, then please - leave a comment and let me know. I’d only be too happy to correct.