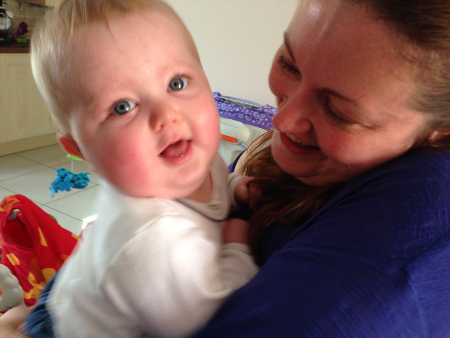 Mattie peered at me from his just over Emma’s shoulder as she carried him away from me towards his new bedroom. Just out of the bath he was wrapped in a warm towel and was pleased as punch after splashing in the water. We made eye contact and I got a huge smile, he reached out toward me his arm over Emma’s shoulder. His eyes twinkled mid smile. Then in an instant he was gone. For half a second the Mattie I knew, “My Mattie” vanished, his eyes rolled up into the back of his head. The spasms had returned. Subtle no more - it was clear they were back. It was time to make the call to the hospital and to talk about upping the dose of Vigabatrin.

It was only one spasm but after such a good run of not having any was really disheartening to see them return.

Emma took Mattie into Temple Street Children’s hospital again today, it was a scheduled trip and nothing to do with the increase in medication. Rather Mattie was in to be assessed by the physio and occupational nurses. Infantile Spasms (west syndrome) can cause regressions and slow development and this was Mattie’s progress checks by two experts who know exactly what they were looking for.

The Not so Cheery, Cheerio

At one point the nurse placed some cheerio’s on the plate in front of them. He’s in no way ready to actually pick them up - something he should be heading toward at 7 months.

The tests done, the results came back. Mattie is behind in some of his development. He needs more strength in his arms and his hands, with some additional fine motor skills in his hands in particular.

We’re lucky in that Mattie is very young and we’ve caught this so early, we’ve got the chance to do something about it. We’re also lucky that Mattie isn’t too far behind, according to the nurses unless you were looking at him with the same critical eye that they have, the areas he’s behind on would not be immediately noticeable.

The nurses gave Emma a set of instructions and suggested exercises which can help Mattie. - The doctor has ordered more tummy time as this should help Mattie develop the muscles in his arms which he needs, when these develop more it should also assist him in his fine motor skills.

During the course of the day Emma noticed Mattie being ‘skittery’, and ‘jittery’ as he was when we first moved onto Vigabatrin. But after our observations yesterday the spasms are definitely back, no second guessing required. As we had planned after observing them last night Emma called the hospital. After speaking with nurses and conferring with the head of neurology, we decided to up Mattie’s dosage to 1000mg of Vigabatrin per day (90.90mg /Kg). Let’s hope this does the trick, I know Mattie could do with the break… The good news is that the neuro team have been very impressed with the way that Matte has responded to treatment overall so far. Even with this increase Mattie is still on a low dosage, and they are pretty confident that this increase should take care of it.