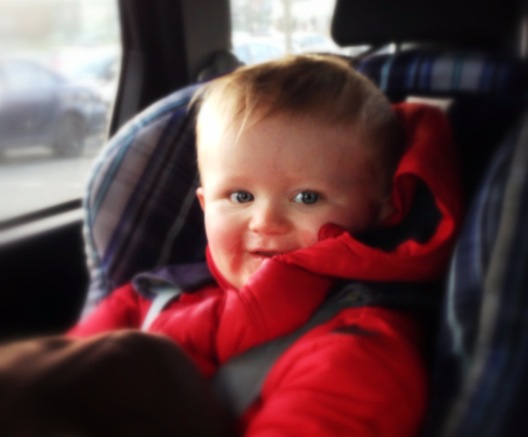 We had a brilliant time over the Christmas break, with two trips back to England one for new year, and another to catch up with friends in early Jan. Watching Matthew as he observed other babies, toddlers and assorted infants of all ages was fun. His excitement at wanting to get involved was really reassuring. Since my last post about Matthew we feel he really has made huge progress. However not all has been smooth sailing. During one of our recent ferry crossings I saw Mattie have a spasm, and in total we’ve seen about 10 individual spasms over the Christmas and New Year period. In fairness Mattie had also picked up some sort of virus over the Christmas period, which I’m sure didn’t help. Seeing the spasms made both Emma and I more keen than ever to hear what the doctors have to say about his progress, in particular if anything in his last EEG was concerning or worrying.

On Tuesday Emma took Mattie back into Temple Street hospital for his check-up. Mattie was seen by a new Registrar, the head of neurology, physiotherapy and occupational therapy. While he didn’t get another EEG he did get a good checkout, with some interesting feedback.

First up was the neurology department where a nurse weighed him and Mattie checked in at 12.7kg. Mattie’s weight is important as it defines the dosage of medication he receives.

This meeting consisted of explaining Mattie’s history to a new doctor. Within Temple Street Hospital the registrars all rotate between departments, our last doctor had moved on and Emma spent a lot of time filling in the new Registrar. Emma recapped all of Matthew’s history and touched base on the last EEG, which was performed in Nov, although Emma didn’t get the chance to discuss it in detail. Next the reg and Emma went through the process of checking Matthew’s developmental progress.

**Q.** Is Matthew standing yet? **A.** No... But Mattie is sitting up brilliantly by himself and playing well on his own. The Registrar wasn't concerned by the fact he wasn't walking. The Reg shared statistics that only 25% of kids walk by 12 months, which increases to 97.5% by 18 months. Then of the remaining 2.5% only few have reasons for not walking. Mattie has no reason apart from IS, so he should catch up. Mattie's pincher grasp and eye/hand eye/mouth coordination was excellent. Mattie was really focused on trying to grab his pen whilst he was talking to me - got it in the end and was trying to take the lid off:)

As I mentioned in the past, the drug Mattie is currently taking (Vigabatrin, also known as Sabril) has the potential of causing peripheral vision loss.

The Registrar also checked Mattie's peripheral vision while Mattie was distracted - his response was excellent 🙂 Mattie picked up on the slightest movement out of the corner of his eye - this bodes well considering the medication he is on. **Verbal Development** The Registrar also asked about Mattie's verbal skills. Mattie is doing brilliantly here - "Mama", "Dada", "Hiya", and "all gone" (which doc was particularly pleased to hear about - two words together:)). Also Mattie responded brilliantly when the Registrar called his name :)Emma explained the that we had seen two spasms on Jan 28th when he had a virus but nothing since.

The Registrar had obviously done all the leg work and filled the Neurology Consultant in. The Consultant welcomed us into the room with a smile and said he heard Mattie is doing brilliantly. Queue Mattie smiling, clapping his hands and banging the table.The Consultant said he wouldn't change anything and plan to see us in 6 months providing Mattie stayed well. I had some questions though: **Q.** Mattie's EEG in Nov showed much improvement, little or no hypsarrythmia but a slow electrical background. I asked the significance of this. **A.** Apparently his EEG was much improved but one or two individual electrical spikes where observed along the slow background. This can mean a few things: 1\. Vigabatrin is keeping IS under control but might not be suppressing it 100% this could account for spikes and slow background may be present due to medication 2\. Spike and slow background may be due to another form of epilepsy being present. This will remain an unknown until we wean meds and observe what EEG and Matthew does going forward - so it's a wait and see **Q.** What is the plan for weaning?! **A.** The Registrar had said they would wean a year from the last spas`m observed - which would be jan 2015. However the Consultant corrected this, he said we would wean from a year the last significant presence of IS was observed - so that makes it end of September or early October. The plan which was agreed was to return to hospital on September 23rd for an EEG and another appointment with the Consultant, if the EEG is good the Mattie should start to be weaned off his Vigabatrin over an 8 week period. If more IS/seizures are observed then we need to go back in for another EEG to figure out how to treat going forward. **Q.** We're planning on a trip to the US later on this year, but the time zone difference and the time spent travelling may mean that we have to reset or alter the set times we currently give Mattie his medication. **A.** The Consultant had no concerns here, apparently Vigabatrin is one of the less time sensitive medications. So giving doses 10 or 14 hours apart will cause no issues.

We’ve also seen Mattie exhibit some odd behaviour, like arching his back and flinging his hands up to his head, particularly when he’s tired. It doesn’t look like a spasm, but it doesn’t look 100% normal either. Emma wanted to check that out too…

Finally I had described some behaviours that Mattie has - which is arching his back/flinging himself back when tired. Fortuitously (or not) Mattie did this at the end of the appointment with the Consultant.The Consultant's response was that is it's an odd behaviour but is most likely just that - a behaviour. But again only time will tell, so we just need to keep an eye on it!

The Physiotherapist's first impress of Mattie was that he has come along brilliantly in 3 months. Compared to his last visit Mattie is now sitting up fabulously and balancing himself. He's also reaching, stretching and grabbing well. We've also seen Mattie try to start shuffling on his bum, he's not got the hang of it yet, and when he does do it both Emma and I are pretty sure he doesn't realise that he's actually moved himself. But all in all the Physiotherapist thought this was also brilliant.Mattie still hates his tummy time, but the Physio said need to continue to encourage him to do this. The Physio suggested working on getting him on his knees (because he does hold his weight well) and showing him how to get from knees to bum and vice versa. Mattie has started taking his weight well on his feet too, but there is room for improvement here too. We need to encourage positive pressure on his feet, we can do this by sitting him on one of our thighs and then putting Mattie's feet flat down on the ground either side of our thigh. Mattie has all the precursors for walking, we just to work on encouraging him to give it a go. When we were initially referred to a physio for Mattie we were unable to get a physio close to home. There were none available. So instead we've been driving into the centre of Dublin to visit the physio centre in Temple Street Children's hospital. Things seem to have improved and we are now getting a referral to a closer, more local physiotherapist. Hopefully that will work out. If it doesn't we've a back-up booking back at Temple Street for later on in March.

The Occupational Therapist was absolutely delighted with Mattie :). Matties seems to be doing everything he should be at this age and more :). Mattie's pincher grip is awesome, he's passing from hand to hand well, picking blocks out of a box and putting them back in. We just need to encourage Mattie to move up to the next stage; shape sorting !The next visit with the Occupation Therapist is tentatively scheduled for May / June (waiting for appointment confirmation and final date), that should be our last appointment with the occupational therapist! ... Wohooo go Mattie!

Mattie playing just before bed - check out those motor skills!