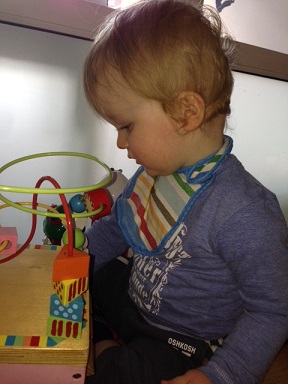 Knowing that Mattie has IS makes both Emma and I second guess ourselves all the time. We spend ages watching Mattie, looking for any signs of a spasm. Even when we witness the smallest thing we end up asking ourselves the inevitable question, “Was that normal? Or was it a spasm.”. The doctors and nurses at Temple Street have given us a set of rules to try to allow us to control our second guessing. Put simply these rules are:

These help, but we still end up watching him very closely.

Over the last couple of months I’ve only seen one thing which has concerned me. I was putting Mattie to bed, part of his bed time routine is milk, a story and a cuddle in his bed room. Sitting in the arm chair in his room I’d just completed his story and we were cuddling for a couple of minutes, when suddenly he forced his head into my chest, with his eyes open, his eyes rolled hard into the back of his head. At first I thought it was just a normal sleeping incident, but the pressure he was exerting on my chest and the strength and distance his eyes rolled was more than I had seen before.

Needless to say I was still cuddling with him 30 minutes later, waiting to see if it happened again. It didn’t.

Since then both Emma and I haven’t seen much in the way of anything concerning. That doesn’t mean we think he’s out of trouble yet, but it does bode well.

Emma and I have been splitting the check-ups and hospital runs. It was my turn to take Mattie in for his occupational theory check-up.

Mattie’s check-up was at 10 am, with the traffic on the route to the hospital that meant a 8:30 am start. In the morning rush out of the house I had forgotten to give Mattie his Vigabatrin (medication). The Vigabatrin has the effect of slowing him down a little. I’d not noticed I had forgotten to give it to him. I must admit at the hospital Mattie was in great form.
The appointment started late and to occupy Mattie we played with some toys in the waiting room. Mattie was all over the toys and was full of smiles checking them all out, pulling himself up and trying to get into things.

At the time of the checkout Mattie was standing, and edging himself along the sides of tables and chairs, not walking on his own, but getting very close.

When we saw the occupational therapist (OT) she ran through a bunch of activities which she’d expect Mattie to be able to do. The OT also explained the difference in roles between herself and a physiotherapist; a Physio focuses on the large motor control and making sure that is all working as expected, while the OT focused on finer motor control, and the overall mental ability. So while the OT focused on some movement, she also ran through tests which attempt to assess Mattie’s problem solving skills.

The tests ranged from drawing lines using pencils, standing and reaching for objects and matching shapes up – putting the right shaped block through the right shaped hole.
At the end of the assessment the OT announced “He’s discharged, I don’t think I need to see him again”. Wow – great news. But I have to admit that the worried parent in me came out. Mattie is still on his medication, and we still don’t know that he’s all clear of them, IS can come and go with medication, and that it can still affect him. I shared these concerns with the OT and she agreed to give Mattie another check-up in October when we returns to Temple Street for his next Neurology check-up.

Things do seem to be going well, and I think it’s fair to say that both Emma and I are cautiously optimistic, if things continue to be well then Mattie’s next scheduled check-up is in October. If that check-up goes well Mattie will start to be weaned off his medication.

Mattie is doing well. He’s still not walking, but my word is he ever so close to it. Emma and I would love to see him walk into his next Check-Up under his own power. We’ve our fingers crossed…