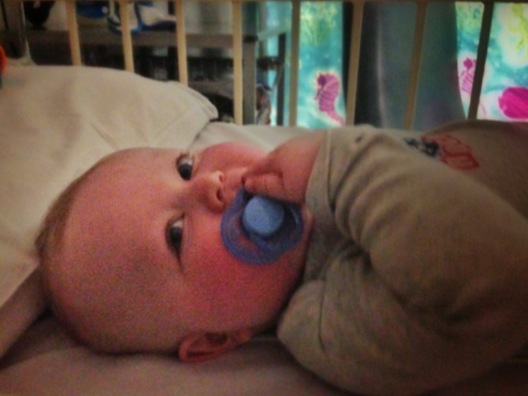 The house feels empty and quite. Ben is in bed sleeping and I’m typing away in the study. No one else is here. Matthew is back in hospital and Emma is by his side. All down to a routine check-up, that wasn’t that routine, and a small factor which started at his check-up last week…

## Tuesday 10th of September (Check-up Last Week) During Mattie’s check-up he had his blood pressure taken. It was 118/70, high and the nurse and doctor seemed concerned. It appeared higher than normal in the hospital when he was last admitted however this time it didn't seem much of a concern, so little of a concern in fact that I didn't mention it in my last note. ## Spike of Spasms Confusingly the start of the Vigabatrin seems to have resulted in Mattie having more Spasms, not less. The Vigabatrin comes in sachets of 500mg, we’ve got to give him two doses of 200mg. Tuesday night we got our dilution calculations wrong and gave him 20% (1 fifth) and not 40% (2 fifths) we should have done. We corrected that for the next dose on Wednesday. At the same time that we introduced the Vigabatrin we reduced the steroids. The increasing in spasms has gotten Emma and I both quite concerned; the steroid reduction wasn't significant enough to have resulted in the rise of spasms, so why has it happened? ## Cranky Baby Week The change in medication also heralded the start of "Cranky Baby Week". Ohh my word... Mattie would cry and scream almost constantly. As soon as we put him down he would start to cry. The crying sometimes marked the start of spasm cluster. With Ben, as I guess with a lot of babies, once we knew he was OK and that nothing was wrong we'd let him cry it out. But for Mattie with his spasms, we felt that that really wasn't fair. To top it all off Matthew has continued to teeth like mad, with bright flushed cheeks, and his fingers almost constantly wedged into his mouth. Dummies last about 5 minutes before being spat out and the crying returns. The crankiness continued from Wednesday all the way through to Saturday morning - none stop. Emma is a rock star and kept a brave face through it all but it really wasn't fun. - This really was *Teething on Steroids*. ## Worried About Spasms By Thursday afternoon Emma and I had grown very concerned about the increase in spasms, so much so that we decided to get in touch with the hospital. ### Spasms Return in Intensity Up to this point we had seen a drop in the spasms. The strong, [intense spasms we saw before going to the hospital](http://withbighair.com/infantile-spasms-and-matthew/) had vanished; they had been reduced to a spasm which looked more like a little startle, and we’re getting hard to spot. That was until the new treatment started. By 10 am on Thursday morning we had noticed several individual (not clusters) of spasms, more than we saw before the change in medication. They were "full on" intense spasms, like the ones we saw before his medication started. Could this rise in spasms be related to the Vigabatrin? Is it too early to tell? ### 11:21 AM - We’re worried enough to call Temple Street. I got through to a registrar who works for another lead doctor, not the head of neurology we had been seeing. I explained what we’ve seen so far and the doctor on the phone explained that, that was not what they would expect to see. She is going to talk to someone on our doctor’s team. The doctor on the phone took down my telephone number, and thanked me for calling to let them know. Now we’ve just got to wait and see. ### 3pm (ish) Got a call from a registrar from our normal doctor’s team in Temple Street. The long and short of it is that the new drug won’t cause the spasms. It seems that the steroids were not as effective as we hoped. The presence of spasms now suggests that the spike is coincidental. The reduction in the steroids so far isn’t enough to have caused the spasms to return either. ## Trying to Introduce Normality The spasms and grumpiness continued right through Friday and only let up a little on Saturday when we did a family trip to the zoo. It was great to get out of the house and try to do something normal as a family. I think that Independently Emma and I had reached the same point. For me it came while washing and sterilising bottles, I looked down into the sink and realised I wasn't sterilising bottles any more - I was sterilising the syringes we use to give Mattie his medication. It was a very depressing though, I never thought I'd be putting more syringes in the steriliser than baby bottles. I found this upsetting. After feeling sorry for myself for at least a good 30 minutes I decided to give myself a good, mental kick up the arse. Being upset about it wasn't going to help anyone. With Ben's birthday coming up there was plenty to look forward to. The trip to the zoo was a welcome reminder of normality. The trip also appears to have been a watershed moment for Mattie; his grumpiness seemed to reduce after this. Small reductions in spasms and grumpiness continued over the weekend and by the time Mattie arrived at the hospital on Monday morning he was all smiles and giggles. Emma and I were both looking forward to chatting with someone face to face about Mattie's spike in spasms and what has been causing it.

When Emma arrived at Template Street for the check-up she discovered that the consultant we are seeing was out on vacation and the registrar that we had been seeing was also out.

Emma and Mattie were only in for a check-up by one of the nurses so that wasn’t a big deal. During the check-up the nurse took Mattie’s blood pressure 4 times. It was high, very high - at one point 140/90. To put that in context a baby’s systolic BP (the top figure) should be (usually) somewhere between 70 - 90. The nurse asked Emma to stay close to the hospital while she got hold of a doctor to check out Mattie’s stats.

Emma had planned to go out shopping for Ben’s birthday in town anyway, so this worked well. The nurse said that they may want to see Mattie again after she had spoken to a doctor.

After about a week of a really, extremely cranky baby Mattie seemed to be in a much better mood today. He was playing and “goo-ing”.

The nurse explained to Emma that a side effect of the steroid (Prednisolone) is agitation and restlessness (cranky baby). But this side effect doesn’t hit straight away, it arrives after about two weeks of starting the medication. Apparently it catches a lot of parents by surprise. It’s nice to see that it has eased off a little.

Emma called me over lunch

I’ve just heard back from the hospital. They want me to bring Mattie back in. The nurse said that we should be prepared - they might need to admit him for observation while his blood pressure is so high, They want to see if his blood pressure as settled since we’ve been out and about.

After returning to the hospital Mattie had his blood pressure checked again, it was still high, too high. Mattie was admitted and given medication to bring his blood pressure back down to normal. Additionally the doctors are looking and speeding up weaning process to get him off the Prednisolone (steroids) more quickly than we had originally expected. Then, just to confirm everything is OK Mattie is scheduled for a Doppler exam on his heart tomorrow. The Doppler exam should tell us if there has been any damage to his heart from the high blood pressure, of if, there is anything wrong with the blood flow which might be causing the higher blood pressure. The doctor’s aren’t expecting to find anything. I hope they don’t either…