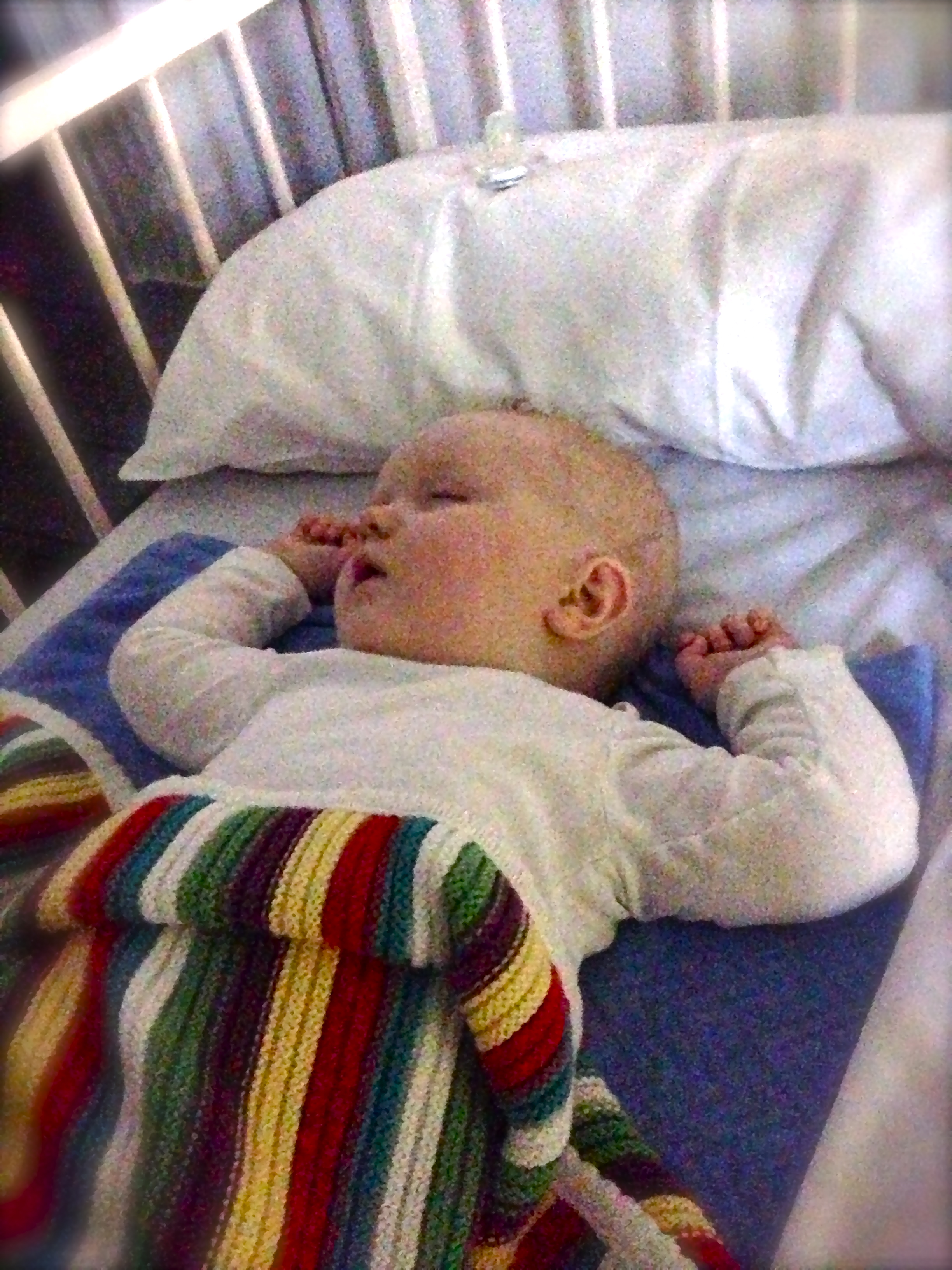 Mattie is a sleep. At last. It’s great to see him at peace. The last few hours, his normal bed time, have been hard. His last sleep was around 3pm, and the ward is very noisy around his normal bed time. It’s when he is tired that his spasms hit. They are particularly common just as he is waking from a deep sleep, or is restless and can’t sleep. To top it all off the steroids he’s been prescribed have started to take effect, the first impact has been his increased appetite - he’s eaten loads and early. Then he started teething, poor we guy. His cheeks where flying off him the nurses have been fantastic, they are very observant and right to hand whenever you need them - they are so good it’s almost spooky. But they came over and gave him some calpol. That helped a lot.

As I’m sure you all know, Mattie was admitted to hospital following a meeting with a consultant yesterday. It took Emma and I by surprise. Mattie had been experiencing spasms, he’d throw is head forward. At first we thought it was just a muscle development thing, perhaps his neck and upper body had not developed enough to keep him upright for long? But when we started to notice his eye’s rolling in his head, just before the action took place we decided to get it checked out. Emma had recorded some of the spasms in her iPhone and was able to show it to the consultant. Within 3 hours a bed was found on a ward, Mattie was admitted, a letter sent to our family GP, an EEG performed, the results analysed and he’d been started on a course of steroids, with an MRI tentatively scheduled in a few days.

It caught Emma and I on the hop; I think we both half expected the consultant to tell us we were worrying over nothing.

Emma stayed with Matthew last night. Emma’s sister collected Ben from crèche and I was home in time to do bedtime with Ben before swapping; Emma’s sister baby sat and I was able to visit Emma and Mattie in hospital. Emma did the first night with Matthew and then we swapped this afternoon.

After Emma left Matthew woke almost immediately, typically – just as I’d left his bedside to visit the loo! He was grumpy when I got back and was in the middle of a spasm attack.

The spasms come in waves. We’re keeping a record of them on a log sheet for the ward. This helps to see if the steroids he’s on are having an effect. They normally last about 8 minutes, during which he’d have lurching like behaviour, throwing his head forward if sitting. When lying down he’ll kick is legs into the air. They can upset him and he’ll cry during them.

Matthew had a trip to the dermatology department. He’s suffering from eczema, always has done. But apparently skin abnormalities can be indicators of what’s wrong with him. We walked through the maze of corridors which is the hospital. They all seemed to be heated to the same temperature as any public swimming pool (roasting), with the exception of one room – the dermatology room.

The dermatology examination, which consisted of shining a UV light (Black light for the American’s – I think) over his skin in a dark cool room, revealed one thing; Mattie loves UV lights and cool dark rooms – he was almost asleep. Nothing untoward was found. He’s a follow on appointment in 6 months’ time just to check up on him and any possible changes.

While walking back the ward we passed the Temple Street School, it’s a full Department of Education school, currently shut for the summer, it opens next week. There is no escape from homework even when you are ill. Well at least Matthew has a couple of years yet before he has to worry about that.

One of the doctors from Neurology came down to visit and asked how he was doing. I had a bunch of questions. I wanted to know what the EEG showed, was there anything additional they could infer from it? The doctor said it showed increased electrical activity. That Mattie’s brain wasn’t returning to a normal rhythm at all, even without the seizures. They were looking to get that ‘baseline’ down to normal. The steroids would do that. I asked if it was epilepsy? The doctor said ‘no’ but it was in the same category. I asked if it was like the traditional version, with an electrical storm over the brain which then passes from one side of the brain to the other. The doctor said no. ‘It’s very complicated’, - That was a very frustrating answer, I had to try to check my response. I know its complicated, I’m trying my best to understand it. I felt myself wishing there was some recommended reading on this.

The doctor went on to explain that based on what they’d seen in the EEG they didn’t expect to see anything in the MRI, but wanted to do it rule anything else out. Finally the doctor tried to reassure me that they had seen a little girl recently who was 9 months old who suffered from the same condition. The little girl had reacted well to the steroids and now was basically normal.

Visit from all of Neurology

The Doctor in charge of Mattie’s case came down to visit. Along with this doctor came every other doctor from Neurology I’d ever seen before.. Wow. The group descended on the bed. I’d just put Mattie down, hoping he’d sleep - obviously that wasn’t going to happen now.

The Doctor asked if everything had been explained to me. I said yes, I think so, but there is a lot to take it - it was a shock to have Mattie admitted yesterday. I’d appreciate an explanation.

The Doctor explained again what was in the EEG. That this was typical of this type of condition. Almost classic. It’s something they watch out for in this age range. The pattern it showed was fairly typical. He’s smack bang in the middle of what they would expect for this condition. He’s 100% on that. This Doctor said it was a form of epilepsy.

The Doctor said the plan is to try to control the spasms with steroids. They try to nip it in the bud at this early age, It is treated fairly aggressively. They are concerned that continuing to let them go on will have a long term effect on his development. The steroid treatment will last for 2 weeks. No conclusions will be reached before the end of the two week period. If it is controlled within two weeks and the steroids are working then they will look to wean him off them for a following couple of weeks. Then continue to monitor. There are a team of nurses and experts on hand who can help. This includes a telephone help line.

During the conversation The Doctor asked to see the videos we have of Matthew, unfortunately they are only Emma’s phone, not mine.

At this point I had an opportunity to ask a few questions.

I first asked about the long term impact. Is this a condition Mattie will have to live with for the rest of his life? - With on going treatment?

The Doctor: It’s too early to tell for Mattie. That will become clear over the coming months. There are generalities which I can explain, but obviously you’d like to know what’s going to happen with this chap? (Point’s at Mattie).

Me: ‘Yes, I would. But the generalities would help - it would be good to understand the ball park - assuming the MRI doesn’t show anything.’

The Doctor : Well there are children who go on to have learning difficulties, and need assistance, who we continue to see on a repeated basis as we go forward. We do see those cases.

There are children for whom the steroids don’t work, and they have learning difficulties and need additional help.

There are children for whom the steroids work very well. They may have some slow development, and learning difficulties.

We see everything in between.

I was keen to understand, as much from a personal planning point of view, as anything else how long Matthew will be in hospital. The Doctor explained that Mattie will be in until Friday, They don’t want to keep him in beyond the weekend. The Doctor is keeping him in to ensure an appointment for the MRI. In the past the steroids were taken via injection and we’d have to train the do parents to do the injection. But now the drugs are orally administrated mixture which can be taken at home. But access to in house facilities is quicker as someone on a ward; an MRI for an outpatient takes much longer. So if it means staying in hospital for an extra day to get the MRI then The Doctor recommend we stay.

The Doctor explained that the best hope is that Mattie takes to the steroids really well, the MRI shows nothing and that we get him home soon. The impact on him going forward and developing will only become clear in the coming months.

Our Personal Observations of Mattie

I’m not sure if the steroids are helping, maybe it’s too early to say, maybe I’m seeing more because now I know what to look for…