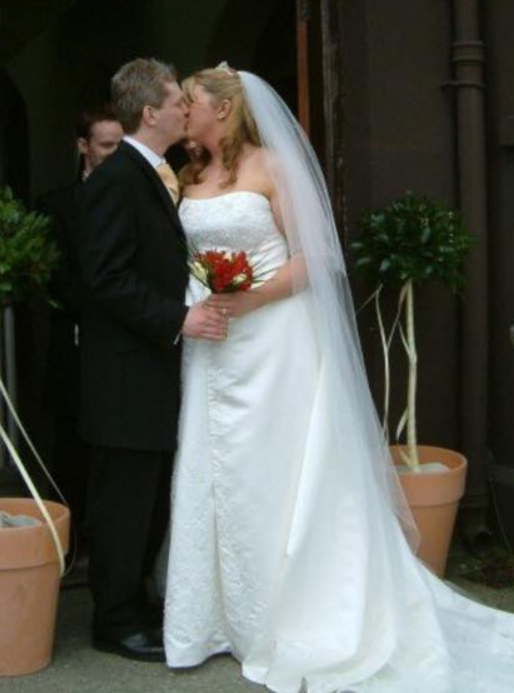 11 years ago today, I woke with a hangover. As the room came into focus I looked about. Flash backs from the day before came before my mind, and the largest, biggest smile spread across my face. The booming headache was replaced with a serenity and happiness for which I felt immensely blessed.

I glanced at the table in the hotel room, it didn't look a sturdy as the one upon which John Page, a family friend had danced upon the night before.

On top of the table in the hotel room sat a scrap of paper, it was the guide I'd given Robert Macdermott; a list of every memorable but wholly embarrassing event we had shared together at university. I'd requested that he would not use these, however in the speech he gave to the entire room of friends and family he hit every single one. The embarrassment of that event pinged lightly off my receding hangover.

I recall sitting at the top table the night before and looking out at a sea of friends and family. Seeing my Grand Mother’s smile as she sat at a table with my cousins, Uncle and Aunt.

I recall my father, still struggling with the effects of his stroke, standing to give a speech. My father had told me years before he took ill about what an amazing public speaker my uncle was. To my great surprise after my father spoke, my uncle stood and gave a truly inspiring, and humorous and captivating speech on the topic of “love”.

As I lay there on the bed the morning after the night before; I think some of my tiredness can be attributed, not to an excess of bacchanal, but the more mundane. My nerves had gotten the better of me and I didn’t really sleep the night before.

In the early hours of the morning I gave up trying to sleep and found myself in the hotel pool with David Bullock, and Rob.

But those nerves where nothing compared to what I experienced in the Church. Waiting at the alter with David, Rob, Stephen Melia and Stephen Airey, they kicked in big time.

Rob and David started trying to relieve my nerves my coughing and spluttering under their breath “don’t do it”. I don’t think that really helped.

Then, I saw my sister, Elaine in her bride’s maid dress, following that Orla, Ruth and Dawn, and eventually Emma and her father Aubrey. I got the biggest smile from Emma and my nerves relaxed. Well, they did until I shook hands with Aubrey, and his grip left me in no uncertain terms about the importance of the day. Little did I know that I would be tested in my new role as son-in-law quite so soon. I discovered that the walk to cut the wedding cake could pose the first really important decision of my marriage.

The wedding cake, a large chocolate cake had been transported with great care by a team of friends, including Elaine MacDermott and David Bullock. They had balanced that cake on their knees as, I in a little VM Polo had got lost on the back streets of Dublin – where every road, no matter which one you take, appears to be sign posted for the airport. While the cake had made it safe and sound to the Hotel, my travel from the top table to the cake stand would not prove so easy.

Emma had told me that the one thing she was most worried about, was tripping up and falling on our wedding day.

Emma, being closest to the cake, stood first and turned to walk toward it, and I followed. It was then that I saw her fall; the train of her dress extended in front of me as she fell away from me. In my mind, time slowed and a set of possibilities where quickly evaluated:
1)    Lunge for Emma and save her from the floor. In doing so I would need to step on the train of her dress, possibly ripping it.
2)    Let the dress survive, and let Emma fall to the ground, then pick her up afterward.

I the second I had to make this, I concluded that Emma would like to see out the rest of the day in her wedding dress more, than not falling to the ground. So with I stood, helpless as I watched Emma’s worst fear unfold in front of me.

I quickly helped her to her feet and hugged my bride. She started to tear up. With her back toward the sea of family and friends, she couldn’t see my hands. I looked over her shoulder at the first table of friends and with my hands behind Emma’s back I made the universal sign for applause. The room responded with gusto and Emma’s trip was met with a great cheer and much clapping.

While Emma’s fear had actually produced a great big cheer. The same however could not be said for my speech.

Now I have to admit, my preparation for the speech on the big day wasn’t great. So when it occurred to me that I needed to give a speech I quickly borrowed a pen and a napkin and started scribing. The nerves did indeed return. In the best style of all groomsmen my new brother -in-law Stephen Melia did his best to ensure that my nerves were relaxed. “Just remember” he said and then referred to Emma’s tumble “you’ve already got Emma on her back”.

So I stood, and thanked everyone, we raised a toast to all the absent friends who were no longer with us, before I turned to address my new wife.

“Ever since seeing Emma walk down the aisle” I said, “I’ve been looking forward to getter her on her back, but never thought it would happen so soon.”

As I finished the sentence the entire room took a collective intake in breath, and silence befell.

Then a cackle of laughter appeared, first from somewhere on the top table and then it appeared to spread across the room.

After the speeches concluded I caught a few words with Scott Lewis, he told me “Chris, when you delivered that line, I was confused, I thought ‘that’s funny but I don’t know if I should laugh or not’”. Scott continued “But then I looked up, and I saw your new father in law laughing hard and I understood it was ok”.

11 years later, I’d happily acknowledge that a little extra preparation on my speech would definitely have helped. But I wouldn’t want to change a single thing about that day. It is a day filled with some of the best memories, and warmest sensations of friendship and love. It is still one of the most amazing days of my life and was the start of a huge adventure with the most amazing women in the world.