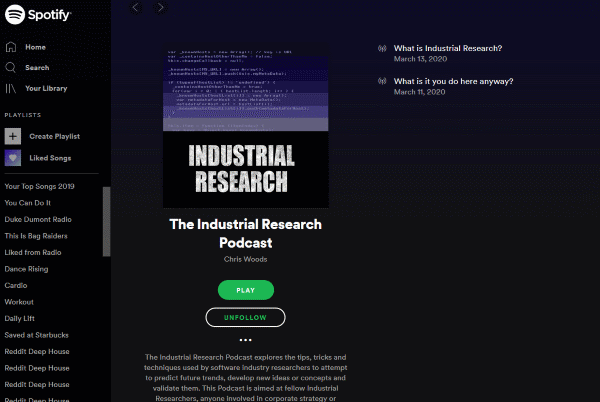 This is the hard bit. So, it is coming up to midday, I’ve reviewed the audio I recorded yesterday. At the time I thought it was good. Then I listened back to it. Dear lord. There is a humming in the background from a water purifier that lives in the basement, and there is me, exasperated at my own mistakes trying to re-record the audio and fluffing some of it. Then there is the content.

There are a few fantastic mini-series of podcasts on podcasts, the two that really led me to launch my podcast are from two guys:

So, I wrote the blog post I’m trying to record in advance. However now listening to me read it back I can’t help but think “God, I could have written that better!”. There is only one thing to do; re-write then re-record. The problem is I keep getting distracted and that’s not helping.

There is a fantastic article on the New York Times about an area of the US around a radio telescope that has no WiFi or mobile (cell) service. The kids that grow up there have a completely different view on the world. They spent last time in front of a screen, and more time outside playing and generally exploring. As a Dad this is fascinating. Yesterday after completing work on the podcast I took the chance to head over to the boy’s school early to collect them. Rather than driving over, I walked. There is a way there which, unlike a lot of the US, has sidewalks (footpaths for US UK/Irish types) the whole way there. The birds were out singing and it was about 13c, so cool, but pleasant. When I told the two boys, we were walking home they were excited, the eldest gave me a gigantic hug

“See for yourself, there is no car”

The youngest told me that this was a “great adventure”. Both asked if I could collect them again without the car today. It is only about 1.5 miles each way, and its footpath takes you through a small wood which sit out the back of our house.

I managed to re-record the first real podcast episode. It was an effort. In the end I just decided to record and well, be dammed - I kept the errors in there. The deleted bits where I completely cocked up in editing. I was really worried that this first real episode would be too long, but in the end, it came in at about 12 minutes, which is bang on what I had hoped for!

My new static website is up ! - Yay, but there are two issues with it I’d like to solve. when you embed a link in social media the social media platform isn’t picking out the correct information to display it nicely. There is a reason for this, my site hasn’t included the correct social media tags in the head of the HTML pages.

A quick search via DuckDuckGo, and I found the Jekyll SEO Tag plugin, which appears to add all the necessary additional fields, and interestingly of all the default theme apparently already has the plugin installed.

Another issue is that the logo image on the home page isn’t centred. That is a bit annoying, another search and I found this article which suggests adding a new CSS definition, then tying that to the image insertion instruction, this I like.

I go the chance to collect the two boys from school and walk with them home. It was a cool evening, about 8c, but the air was still and the walk was really pleasant.

This evening we got the news that all the schools in our county in New Jersey were closing from 3pm tomorrow. Then this evening around 9pm, there was a call, the schools are close immediately. So, the kids will be at home from tomorrow
onwards, and for the foreseeable future.

I was going to wait for the Spotify and iTunes podcast links to appear correctly before I published my first real episode, but given that tomorrow might be spent hanging out with the boys more than expected I decided to launch the episode early. You can now find it up on the interwebs!

This one really introduces Industrial Research and explains what industrial research is and how it differs from academic research. Check it out, and please do let me know what you think!

PS: There is a Spotify Link, but it is not appearing in the searches, yet, apparently that will take a few days. But still - cool as !