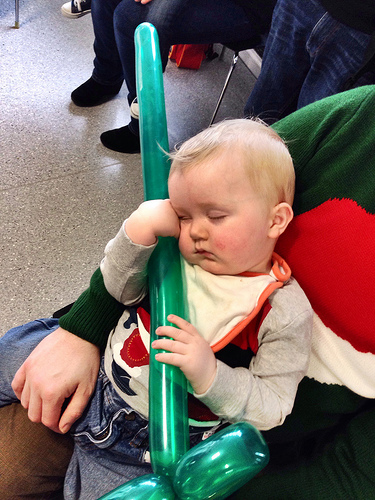 The problem with Hypsarrhythmia, the tell tale electrical activity present in an EEG which signifies Infantile Spasms, and can cause brain damage is that it’s transient; it comes and goes. It’s most frequent during tired periods before or after sleep, but it could happen at any time. The spasms we associate with the condition are just the physical side effect of what is going on in Mattie’s brain, they can be subtle and hard to detect. For months now we had been treating Mattie’s condition with the only indication of success being the lack of a spasm. Getting some hard data - a physical measurement via the EEG that the drugs are working is what both Emma and I were waiting for. If clear it would give us confidence that the electrical activity had returned to normal, and we’d not just missed another spasm.

In the two weeks following the EEG we’d called the hospital twice to try to get some feedback on what it showed. When we didn’t hear anything we assumed that, since Mattie was doing so well, “no news was good news”.

It felt like it took forever and a day, but eventually Emma got the call from the hospital and relayed the news to me. The EEG did not show any signs of Hypsarrhythmia! Success! This was fantastic news! But there was a “slow background”, which we were told was common in babies with Infantile Spasms.

I think it’s fair to say that between Emma and I, Emma is the more optimistic; I immediately focused on the slow background news, and couldn’t relax until I found out what it actually means. The truth is overall this was good news, but I just had a nagging feeling, an itch which needed to be scratched, what did this slow background mean?

After talking to David if there is one thing that stuck with me, was not to take things at face value. So I started a mini-research project into the EEG’s “slow background”. What did this really mean?

An initial search turned up an article which suggested that the slow background was a result of a brain injury, or other physical issue - something we’ve been told Mattie doesn’t have:

So how could this be? Was there something more significantly wrong? We were about to call the hospital back when Emma read an article from another parent on the Infantile Spasms Facebook group, it was asking roughly the same question. One of the answers offered was that a doctor has informed one of the parents that slow background can be a side effect of the medication. I’d not heard of this before so checked it out.

This research paper suggested that the medication Mattie is on could produce a slowing of some of the background waves. What did this mean in the real world? - According to the same article it could induce a mild “sedative” action on attentive tasks rather than on cognitive function. I imagine that while the folks in the study could still complete a mental task, it look them a little longer than expected to get it done. - Which is a good approximation to what the doctors had told us to expect.

Mattie is doing well. In the run up to Christmas he started suffering from normal everyday baby problems, conjunctivitis, and a cold. Emma and I would take this rather than more IS. He’s now 9 months old and has just about got the sitting up straight bit down… Well for good 10 minutes before he gives up. Mentally we think his doing really well; he’s turned into an octopus, hands everywhere, grabbing everything.

Emma’s employer organises a children’s Christmas party in their staff canteen. We took Mattie and Ben down, Mattie fell in love with the balloon sword he had been given, and with a little help from daddy enjoyed whacking his older brother and mother with it. Enjoyed it so much we couldn’t get the balloon of him until, in the middle of the party he fell fast asleep, normally, without any spasms.

We know this is something we’ll need to keep an eye on, but for now at least, we’ve got just what we wanted for Christmas.