"So what happened to Doggie?" - it was one of Mum's first questions during our phone call. I had been recalling how my one year old son had just managed to walk across our bed and pull down all of the cuddly toys myself and my wife keep on our headboard. Doggie had been sitting on the headboard when he was attacked.

I can't answer my mother's question until I tell you all about Doggie and the adventures we had together. It also goes someway to explaining why, up until his rain of toy terror on our bed my son hadn't got his hands on Doggie.

Doggie has always been here. I can't remember when I got him, in fact now that I think about it, it is really hard to recall a time without Doggie. I think all kids have "the toy", the single toy which gets taken everywhere and does everything, "the toy" that needs to be in bed before they get in bed and with them before they wake up. As a child "the toy" for me was Doggie.

Today of course I can leave Doggie behind, he doesn't need to go everywhere with me and I can share with you that Doggie has never made it inside any of the offices in which I have worked.

Doggie now sits on my headboard keeping watch across the bedroom. However when I pick him up and peer into his battered eyes, feeling his de-fluffed fur I am at an instant transported through a whole range of memories.

Doggie was with me during my time alone in a bedsit in Manchester; he witnessed some truly amazingly bad cooking and never complained. It was a bedsit with a brothel two doors down on the left, a bookies and a pub 3 doors up on the right. I only visited the pub.

He was with me in university in Belfast; sitting in the corner of my bedroom Doggie witnessed some amazing hangovers, a lot of study (I did some, honest, you can ask Doggie), and some kisses with the woman who became my wife.

Doggie was with me while I was at school in England, and before that in South Africa. I don't recall receiving him, but I do know who gave him to me. It was someone who I didn't get to spend enough time with.

Of my childhood memories about South Africa hanging out and being babysat by my two "big cousins", Kim and Carolann certainly sticks out. Myself and my sister spent a lot of time with them in South Africa. The big cousins had monopolised the market for babysitting - every time we were babysat, it was Kim and Carolann. The two of them also held, what felt like black belts in the art of tickling children. They were both past masters at it. While I struggle to recall all the details I assume Doggie was there with me too. I'm sure he was flung across the room in fits of tickle induced laughter.

When faced with two babysitters who are black belts in tickling there are two simple options available to any child:

Option 1 : tease the babysitter and get a great reaction, run hide and try to avoid the tickles.

Myself and my sister had a general rule: Employ option 1 with Carolann, and employ option 2 with Kim.

Carolann was so easy to tease, and especially so when she had a boyfriend over when her reaction to teasing would be an order of magnitude greater than when she was on her own.

I remember playing a lot of games with Kim and my sister. I remember Kim being creative, doing a lot of drawing and coming up with a really cool homemade spy set. The spy set consisted largely of tin-foil covered boxes marked "camera" and "walky-talky" etc. Maybe this was just prep in case she brought over a boyfriend, I don't know, but I do know it was a lot of fun hanging out with her. My sister and I also learnt that even with this more cooperative babysitting tactic - we still got tickled.

Kim was also the one who gave me Doggie. In the years that followed my family returned to the UK leaving behind my cousins and their family. The baby sitters in England were not as much fun to tease, and were definitely not black belts in tickling. Let’s just say that the competition in England wasn't as good.

The two families kept in touch and I learnt that Kim had started a career in computers. We also heard the news, that Kim had got leukaemia. I remember the phone calls my parents had with my Uncle and Auntie, the searches for experts in both the UK and South Africa. I also recall the family meeting where we heard the very sad news that Kim had passed away. Of course doggie was there through all of that too.

But now I think it is time for Doggie to have fun, for him to return to being "the Toy" and the glee of being thrown across the room in fits of tickle induced laughter. I have to pass Doggie on and let my little boy have him.

I know my son will pick one of his toys to be "the toy", he may pick Doggie or he might pick something else. Whatever he selects I'm going to enjoy playing with my son and discovering which toys he likes. Doggie of course will be there to watch and play too.

When my son is old enough I'll tell him to story of my Doggie, the adventures I've shared with him, and most importantly the stories about the incredibly creative person who gave Doggie to me. I hope my son adds his own adventures and stories to Doggie or whatever toy becomes his "the Toy" and enjoys his toy as much as I enjoyed mine.

In the mean time Merry Christmas to all. 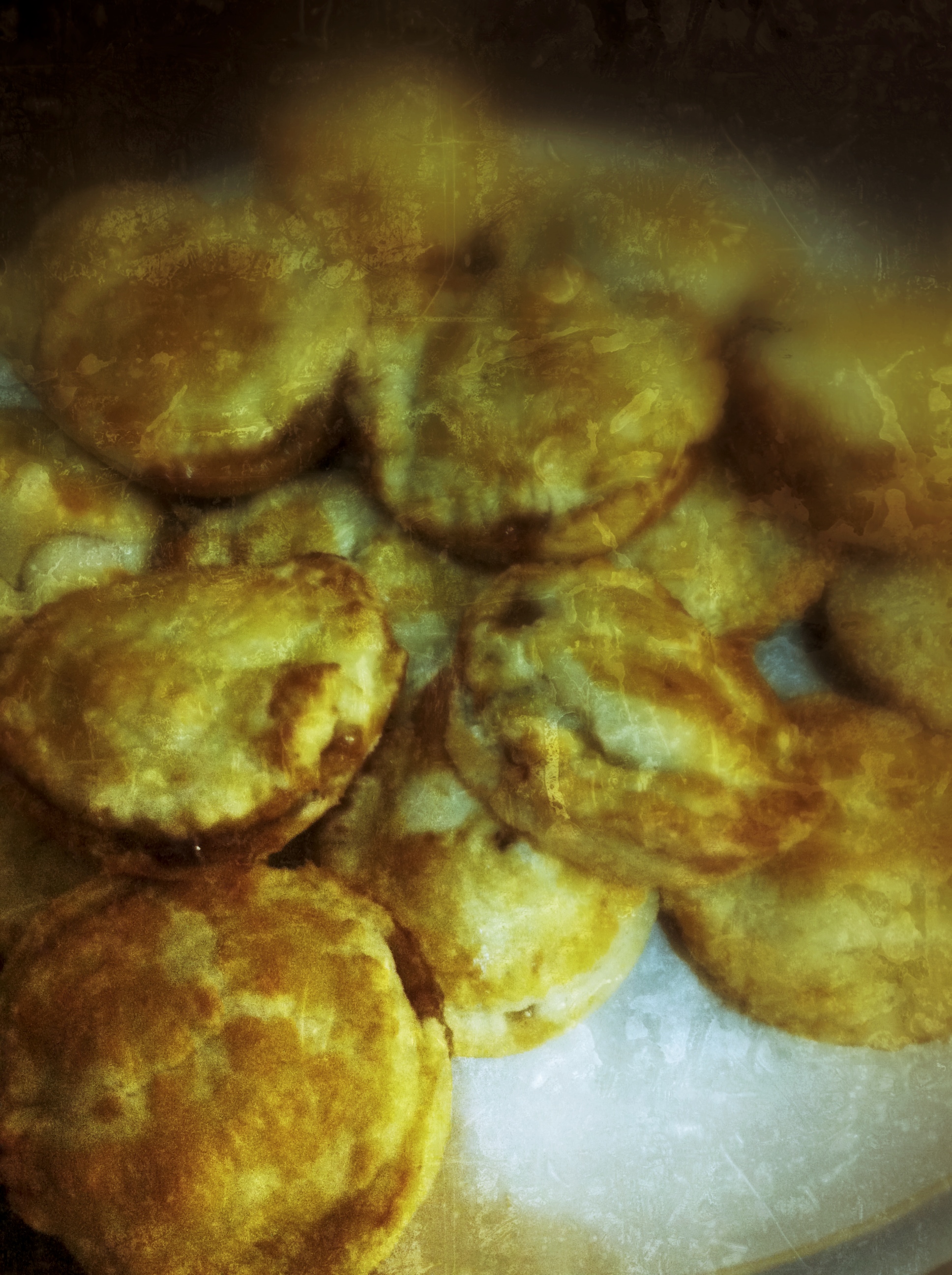 After tasting the shop bought versions I decided that I could do better and I would like to share with tou my results.

Here is my attempt - some lovely home made mince pies. They have been made with additional whiskey. I have been informed by my most wonderful wife that there is a little too much whiskey in them and I'm prohibited from sharing these with my son.

I can't claim all the credit, my brilliant wife helped out loads and rolled out the pastry ensuring a thin but tasty crust. My 'spiked' mince-meat provides a full bodied experience. They really are lovely. I think I got the balance just right - but then I did make them.

So I've brought them into work for an unbiased review... let's see what happens.

I've got my son, Ben in my arms while in trying and failing to run a bath for him. Ben has other ideas and he's trying to break into my aftershave bottle. The door bell rings and brings someone unexpected, who through a random act of kindness will help us have a good Christmas.

My first thought when the door bell rung was one of frustration - I was so close to getting the little man in the bath. But luckily I hadn't quite managed to get Ben undressed yet.

Like most of the population Emma and I had done a lot of our shopping on line. We had received reminder notes that some of our parcels where ready for collection but being flat out in the run up to Christmas we'd not managed to arrange to collect them.

It is nearly 7pm at night and when I open the door I'm greeted by a guy dressed in a postman's uniform. There is no post van behind him, just a little silver car with the engine still running.

Hi, I'm the guy who normally delivers your post. I noticed that there's were a few parcels waiting for collection, some had been sitting there so long that we had been told by our manager that we have to start sending them back. They look like Amazon boxes and I guessed that they were Christmas presents. I didn't want you guys to miss them - it would make for a terrible Christmas. I'm off work now, on my way home and I volunteered to drop off your parcels. I've got a bunch in the back of the car.

Wow - now these guys are crazy busy this time of the year, I'm sure that this posty was knackered but he'd taken some of his personal time out to drop off our amazon orders.

It was a small random act of kindness which I'm really very grateful for.

Tonight Emma dropped off a big box of Roses chocolates to the post office sorting station as a way of a thank you.

An post - you have some fantastic employees! And a very merry Christmas to you all.

See the full gallery on Posterous

So tonight I got the chance to try some mince pies from Aldi. They had some exceedingly stiff competition from Mr Kipling.

As you can see the decorations on the top of the Aldi mince pies were definitely more appealing than that on the Mr Kipling's. These Aldi specimens held so much promise. Also tipping in Aldi's favour was that all of the mince pies in their pack were undamaged! A feat that Mr Kipling couldn't achieve. The Aldi pies shipping with additional packaging which protected the pies.

Filling In The Details
The filling in the Aldi mince pies was delightful, it had a light orange tang to it which I personally really liked. However the filling was very shallow - if only there was more meat! Mr Kipling's on the other hand have a a deep feeling. While not quite as tasty as Aldi's they don't skimp.

Verdict - draw. If Mr Kipling had good packaging - they'd have got this one in the bag!

See the full gallery on Posterous

I love mince pies. So much so that I limit myself to only eating them in December. Today is December 1st so it was with great excitement that I broke my mince pie fast and opened a packed of Mr Kipling's best and was instantly disappointed.

Two of the pies had been smashed on their packet 🙁

On the bright side I noted a marked increase in mincemeat volume compared to Mr Kipling's effort last year.

Only one thing for it - I need to make my own!